Last week we were raving about Rogue One (and enjoying seeing evidence of the “Everdeen Effect”). Now add Passengers to the list of movies we’re excited for in December. Well, we’ve been psyched for it since the movie was announced. Because Jennifer Lawrence and Chris Pratt in a sci-fi space thriller romance movie from the director of The Imitation Game has pretty much everything going for it in our book. Personally, since my favorite movie of all time is Catching Fire and favorite TV show is Parks and Recreation (which starred Pratt), it brings out all my fan hopes and dreams. Which can be a scary thing. So. Much. Pressure.

But now our excitement level is at the SHOW-US-THAT-TRAILER-NOW-impatient level. Because footage debuted at Cinema-Con last night (warning – link has spoilers that I did not read). The buzz was super-positive.

Passengers looks great. I’m surprised at the comedy and chemistry between Pratt and JLaw. The action looks intense and scifi looks cool.

WE CAN’T WAIT FOR THIS. Plus, think of all the fun that’s going to come out of that press tour.

I mean, look at them! 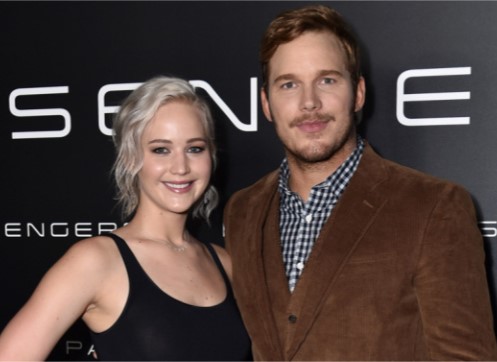 If you’re wondering when a trailer will be available to the public’s eager eyes, bets are on the week that X-Men: Apocalypse comes out at the end of May.

If we can’t have a Hunger Games movie to look forward to this year, this definitely helps.