We’ve got a short but very exciting new series here on Victor’s Village! Our friend Hunger Games Bookclub is now teaching The Hunger Games to our youth as part of her Creative Writing class!

For the next three days, we’ll be posting guest posts from HGBC and her students, gaining unique perspectives on a series that they’ve (understandably) become very enthusiastic about! We’re calling it our “Student Series”. Almost sounds professional, right?!

By all means, please share your thoughts about the posts with HGBC and her teen students!

Flashback to the first time that you read ‘Catching Fire’: the gasp when you realized Peeta had been taken hostage and the chill in your bones at Gale’s words,

“Katniss, there is no District Twelve.” 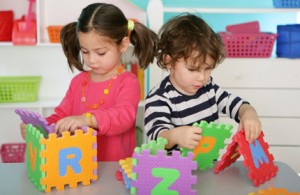 Were you a teenager? Those of us fans that discovered ‘The Hunger Games’ in our adult years sometimes forget that the trilogy was written for the teens. Teaching a high school class on ‘The Hunger Games’ trilogy has given me opportunity to look at Katniss’ story again through fresh (much younger!) eyes. The following are excerpts written by several of my students from an assignment on Literary Devices in the books. I hope it reminds you that Suzanne Collins not only wrote an action-packed trilogy, but she also told a layered, complex story in a way that was accessible for young adult readers.

From thereisnodistrict14: A flashback is a literary device used by authors to convey a message to the reader. It is when a character suddenly remembers something from a long time ago in their life. For example, there is a flashback in ‘Catching Fire’ where Peeta and Katniss are outside the train on the tracks during a train malfuntion. Peeta is telling Katniss about when she was in school and he had a secret crush on her and she sang a song in class. The author is using this flashback to convey to the reader that there is a deeper level to Katniss and Peeta’s artificial romance. 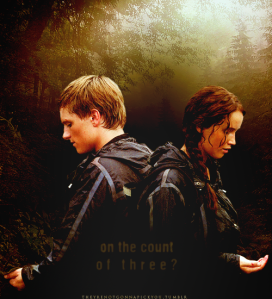 On the count of three?

From dontbeastupidfangirl: Symbolism is… an object that represents something different to give it deeper meaning. Sometimes an action, event, or word can have symbolic value… The Mockingjay is a perfect example of symbolism in ‘The Hunger Games’. It represents the spark of rebellion, the unity of the districts against the Capitol, and the rebellion itself. Another form of symbolism is when Katniss pulls out the poison berries and she and Peeta threaten to kill themselves rather than each other. It symbolizes the districts being fed-up with what the Capitol is forcing them to do. Suzanne Collins did an excellent job with symbolism in ‘The Hunger Games’ series.

From cactus: In ‘The Hunger Games’ the spark was the metaphor for the main plot to be resolved later in the trilogy; the rebellion, and the spark meaning the slow birth of rebellious behavior among the districts. In ‘Catching Fire’, the main plot stems from the “spark” from book one igniting and “catching fire”. This creates uprisings in the districts and sets up the last book to full blown rebellion and war. This is clear symbolism. They even use Katniss’ symbol as the mockingjay to intertwine with the whole catching fire theme, when she twirls and her wedding dress “catches fire” and the fire consumes the dress (another symbol for the Capitol’s strong hold, deciding even what clothes you wear) and transforms it into something new: a mockingjay. I love this scene. It uses three big symbols to tell the story of this entire book in a matter of lines.

Caesar’s face says it all!

Take it from my students… don’t you owe yourself a re-read?
Hunger Games Bookclub